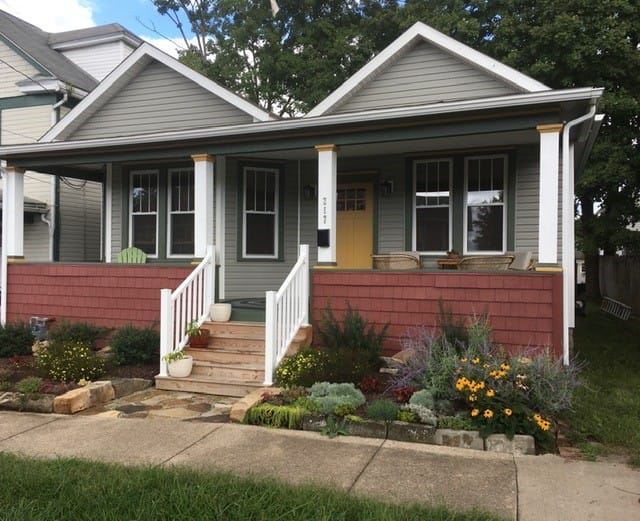 This project started with a flippant 6 minute discussion at a bar that ended up derailing my normal work schedule for 6 months.  Gary had come down with mono at the youthful age of 62 and I was bored as gourd sitting at home waiting for him to recover.  Consequently I jumped at the opportunity to grab a beer with an acquaintance that was thinking about purchasing a home.  Admittedly I would have agreed to have a beer with Ivan the Terrible if he would have texted me that night.  30 minutes later I was sitting in a worn armchair in the back room of Genes with Emily and a cold beer.

Emily is a Morgantown native like me.  Morgantown is incredibly small for anyone who has grown up here, but despite going to high school together, Emily and I only crossed paths when we found ourselves sitting naked next to each in a hot tub years later.  She was looking for her next step in life and I was more than willing to help her find it.  Some people get a tattoo, others buy a new car or have an affair, but Emily was looking for a more substantial type of change.  After moving all over the states and then traveling cross country in a Hyundai with two Chihuahuas she was ready to buy a house and settle back into Morgantown.  Her utter lack of knowledge regarding houses and construction amused me from the get go.  At times I even wondered how she had managed to survive into her late thirties.  Yet her willingness to risk it and try, immediately appealed to me.  Maybe it was the result of being cooped up with mono man, maybe it was my desire to see her moved out of her mom’s basement, maybe it was that third pitcher of beer, but that night it became clear to me that Emily wanted a house to fix and I was going to help her find it.

Emily immediately started shadowing me at work so she could learn some basic skills for her own home renovation. I got her the basic tools, tool belt, tape measure and drill bits (mostly so she would stop stripping all of mine).  She even bought herself a combo tool kit, with two drills, a circular saw, and sawzall.  I couldn’t, however, get her to stop wearing yoga pants to work.  I’m not anti yoga pants, but she never had a pencil when she needed one because they don’t have any pockets!  Note to mention a screwdriver, or scraper or box cutter or any of the other random tools I keep on my person.  It was a difficult transition for her, going from the quiet sedentary lifestyle of the contract researcher and writer to that of a sledgehammer wielding construction diva.  But I had to prepare her for her own renovation project and after several weeks of knocking down walls and driving nails we found her the perfect fixer upper.  In my opinion, it was just the right size; it had high ceilings, lots of natural light and just the right amount of neglect to make the price was right.  And of course it was located in Greenmont.

Emily left me and her daily instructional sessions to commence work on her future home.  It just happened to be a few houses over from my worksite.  I assured her she could come over anytime for advice and I would stop over once a day for consultation.  I thought I had set her off into the world of construction with ample knowledge to get her renovations rolling, but after a few initial days of demo, the duckling returned to the nest.  Emily looked defeated.   She was covered in plaster dust, complaining of a blister and exhibited signs of extreme anxiety.  She began to question whether purchasing her house was the right decision.  She thought she had made a grave mistake and put herself into financial ruin.  She started to speak fondly again of her mother’s basement. She was OVERWHELMED.  I had to admit, I felt slightly responsible for her current state of unrest.  I reminded her it was her idea to purchase a house and she wanted a project.   But when I calmly walked her back to her place to check her progress, the pile of debris that greeted me upon entering was unnerving.  She had taken a once livable dwelling and torn it to bits.  And she had no idea how to put it back together.

Rather than leave my friend in a state of panic, and on the edge of total mental collapse, I agreed to help her remodel her home.  But there were very set rules that would come into play.  I was willing to set 3 months aside (it was more like 6) of free labor to help her tackle the most difficult parts of the remodel; rewiring, re-plumbing, redesigning, reframing and rebuilding up to the finished drywall.  I would help as long as she worked with me for the duration of the day (no bankers’ hours), didn’t complain, didn’t whine and most importantly, didn’t cry.  Crying doesn’t help anything on a construction site.  Emily readily agreed and in a moment of utter desperation unwittingly signed up for what she later called “Adelheid Boot Camp,” a 90 crash course in construction and physical and mental recalibration.  Each successful day is rewarded with the visible gratification of the work completed and a cold beer on the front porch with me at 5pm.

It wasn’t easy.  Emily didn’t pick up the skills of the construction world quickly, and in some cases not at all.  But her spaghetti arms developed a bit of muscle.   She slept soundly, sometimes showing up to site with pillow creases imprinted across her face.  She learned how to use tools without feeling intimidated by them and how to screw things up without getting upset about it.  She learned how to deconstruct, but also how to put things back together, better than they she had found them.  She learned that the roofer at the end of the bar sucking down Michelob ultras has more knowledge than all the PhDs sipping wine at cocktail hour.  She learned to hang drywall, refinish floors, and plumb in a bathroom.  She learned falling off a dump trailer will crack your wrist and using a sawzall while suffering from exhaustion will result in a missing thumbnail.  And perhaps more importantly she knows that taking the risk of buying a crappy house and trying to fix it yourself wasn’t a mistake after all. In fact it might land you exactly where you’re supposed to be.